1,000 outstanding female high-school students tuned into our seventh annual “Tech Women” webinar as part of the Technion’s ongoing mission to encourage the next generation of female innovators

Approximately 1,000 outstanding female high-school students from all over Israel participated in TechWomen2021, an event aimed at encouraging them to continue and invest in their studies in math and science. The event, now in its seventh year, took place online and was broadcast from the Technion’s studio to dozens of classrooms across the country.

TechWomen events are held thanks to the generous support of the Rosalyn August Girls Empowerment Mission (GEM). August, who visited the Technion for the 2018 TechWomen event, believes in the importance of encouraging young women to choose science-engineering tracks. She addressed the students from her home in Florida (USA) and told them how she grew up in an environment that emphasized everything that girls, and women can’t do — business, for example.

She was born in Virginia to a family of Jewish immigrants and wanted to run the family business, but her father told her that business was not suitable for women. Despite this, she went on to study business and turned the family business into an empire. “I want you to know that you can do whatever it is you decide you want to do. I believe in you,” she told the students. “That’s why I put my money up to sponsor a program to bring you to the Technion … and to go on into this world and do the amazing things that are being done at the Technion … The Technion is special. I believe in you. I’ve got your back… You will probably fall in love with the Technion just like I have.” 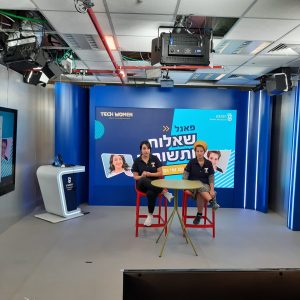 Prof. Ayelet Fishman, Dean of Students at the Technion, addressed the students and told them, “I came to the Technion to take a combination of chemistry, biology, and engineering – a combination that I found in the Faculty of Biotechnology and Food Engineering. After my bachelor’s and master’s degrees, I went into industry, but I realized I would need a Ph.D. to progress – and I’ve been here ever since. I’m researching a variety of topics such as plant protein substitutes, cultured meat, biofuel production, and the development of a new Alzheimer’s drug. Today, 42% of the students at the Technion are female, and by the time you join us, we will be approaching 50%.”

The event was hosted by astrophysicist Dr. Efrat Sabach, who completed three degrees in the Technion’s Faculty of Physics. “As a child, I always asked questions about the world around me, and my father, who is neither a scientist nor an engineer, showed a lot of patience for these questions,” she said. “Today, I know that studying at the Technion gives us the basis that allows us to do whatever we want. So even if you are not sure what you will do when you are older, the Technion is a great place to start.” 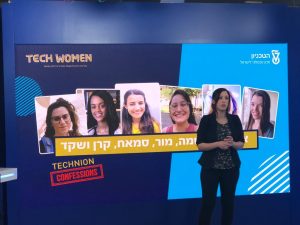 Dr. Oksana Stalnov, a member of the Faculty of Aerospace Engineering, introduced the students to her unique lab. She told them about her research career in a field called aeroacoustics – the formation of sound waves as a result of interaction of flows with dynamic structures. After many years of study, as well as time spent as a research fellow at the University of Southampton, she decided to return to Israel, “and here I fulfilled a dream – I built Israel’s first quiet wind tunnel.”

Dr. Adi Hanuka, who has three degrees from the Andrew and Erna Viterbi Faculty of Electrical and Computer Engineering, told the audience about her time at the Technion and afterwards. “During my undergraduate degree, I already began to develop a system for monitoring physiological data based on eyelid movements, and in the following years I guided students through the rest of this project. In further degrees, I worked on developing small particle accelerators for medical use. What’s beautiful about science is that when you start research you know where you’re aiming for, but you have no idea what you’re going to find out along the way. What’s certain is that the Technion gave me an excellent toolbox that accompanied me throughout my post-doctoral fellowship and is still relevant today to the startup I work for in California.” 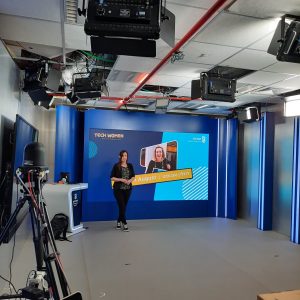 The TechWomen events have already led many high school students to choose the Technion. One such student is Noor Jumaa, originally from Taybeh, who came to TechWomen 2018 three years ago on the recommendation of her math teacher and returned a year later to TechWomen 2019. “The second time I had good SAT scores and thought I was going to study electrical engineering, but two weeks before I enrolled, I changed my mind and chose the Wolfson Faculty of Chemical Engineering. Why? Because I also studied chemistry in high school and wanted a course that combined chemistry, physics, and math. Now, at the age of 21, I’m already in my second year, convinced that I made the right choice and in love with this profession. It’s hard at the Technion, but the difficulty is part of the beauty, and I’ve always been a nerd who’s been busy with math exercises, so I’m used to working hard.”

Nicole Volova also attended the TechWomen 2018 event. At the time she was at the Wizo Nahalal School as part of the Naale program and Anieres Elite Academy program run by the global educational organization World ORT. After the event, she debated which field she would study at the Technion and eventually chose the Viterbi Faculty of Electrical and Computer Engineering. “It’s a great choice because this faculty is very diverse and there’s a lot of choice after the first year. I realized during these last few years that my field is computers, and that’s how I choose my courses.” Nicole is currently in her final year of studies at the Technion, after which she will begin her military service.

“You can do whatever it is you decide you want to do; I believe in you”

“I believe in you,” said long-term Technion donor Rosalyn August at the event. “I have your back.”

The staunch Technion supporter kicked off our annual Tech Women event with strong words of encouragement for the next generation of female innovators.

“I particularly wanted a program that was just for women because I went into a field that was mostly just for men and I was told that women can’t do,” said August who followed her dream of opening an antique and estate jewelry business despite being told only men can work in the industry. “It’s not good to tell ‘Roz’ things that we can’t do. I like to think of the things that we can do and I want you to know that I know that you can do whatever it is you decide you want to do. I believe in you.”

When the Technion was established in the 1920s, there was just one female student on the roster. Now, women account for 42% of our student body. The increase comes after more than a decade of focusing our efforts on encouraging women to choose academic studies in science and engineering.